"It's not too often you come to a historic place like this. I think everyone enjoys being here, and we grew up watching some of the teams that have won here," said Sidney Crosby, who was 9 when the Wings won their first Cup at Joe Louis. "There's not too many older buildings left. And to be here and at the Mellon it's pretty unusual."
--Associated Press

You had to know I'd return with an arena story, right? Of course I would! I couldn't help it, really, as the story touched on some of the points I've made before.

Interestingly, if the Wings or Penguins win the Stanley Cup in Pittsburgh, it will be the first time the Cup has been awarded in Mellon Arena. The Penguins won their two previous Stanley Cups in arenas that no longer exist (Chicago Stadium and the Met Center). If the Cup is awarded in Joe Louis, it will be the third time that has happened (same as Nassau Coliseum). The Stanley Cup has only been awarded more in one other existing and in-use stadium. That's Rexall Place. 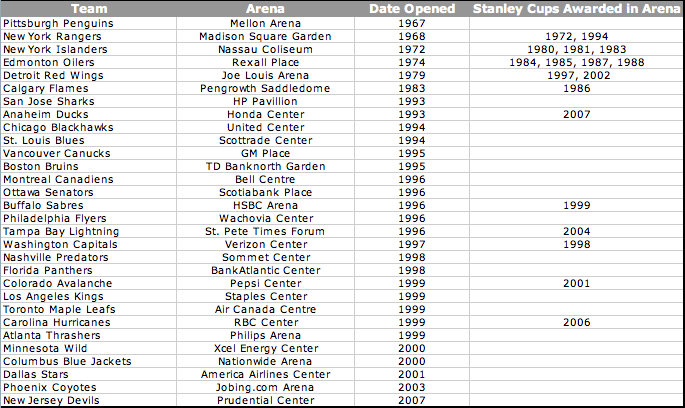 **Because you never see them bunched together, you never do get a complete sense of how ridiculous the names of sports arenas have become. They are just brutal. Jobing.com Arena has to be the worst arena name in professional sports, right, along with maybe Quicken Loans Arena in Cleveland? We aren't exactly talking "The Polo Grounds" or "Boston Gardens" here.


How is it that taxpayers get suckered into paying for arenas and we still get these awful names?


Is it pronounced "joe-bing" or "jobbing"? Either way, that's pretty embarrassing.

Although if that weren't around, the "TD Banknorth Garden" (which, unlike Phoenix's, I had never heard of before today) would be the most ridiculous and clumsy name on the list.


that, to avoid potential hideous naming, Edmonton should just name the new downtown rink "World-Class-City Arena". I mean, it gets the point across, doesn't it?


Heh. Jobing.com sounded so ridiculous to me when they re-named it I actually wrote a derogatory post about it.

Excellent point. Just make sure we have the "Greatest Guys in the History of Edmonton Lounge" inside the arena, and the"Greenwich Village of Western Canada Village" surrounding it.


So, the new BoA policy is; if a Stanley Cup has been awarded in a building it can never be replaced?

Yes, that's exactly the point of this post. I'm glad you didn't overstate it. The "official policy" of this site is that nothing should ever be built, or built again.


I really wonder about the wisdom of putting your name on an arena. Do these companies really see a return from their investment? I can tell you that I have no idea if I've ever used the services of Pengrowth or Skyreach (because I don't know what those companies do), and I know that my purchasing choices haven't been influenced toward Rexall or Canadian Airlines because of their endorsements.

I would like to see a company try something other than platering their own name on an arena. I think there would be a lot of publicity if, say, HP announced that they were renaming the HP Pavilion to The Shark Tank. They'd still get to plaster their ads everywhere, but they'd be acknowledging that the arena is something more than a really big billboard.

If a new Edmonton arena goes forward, I'll be interested to see what it gets named. Any suggestions from Oil fans? (Besides Greenwich North and the like.)


I'm struggling with your point, Andy. I'm with ya on the Rexall thing, but if you're saying the older a building is the more Stanley Cups have been awarded in it; isn't that a bit of a tautology?


Any suggestions from Oil fans?

The Northlands Coliseum would be just fine with me.

I'm struggling with your point, Andy.

CJ, I didn't really want to make much of a point with this post. Or if I did, nothing too deep or complicated. I just thought it was worth pointing out that some players also like playing in the older, more historic arenas, that it was neat that the Pens have never won in Mellon, and that lots of the new arena names are terrible. I also wanted to throw up a graph showing the age of the existing arenas, for interests sake.

Now if we want to get into it further--which I guess we do :) -- I understand your point that you can't play in buildings forever, and that just because something is old, doesn't mean it's good. But I guess if there was a point to make about Rexall in this post, it would be that a) there's nothing structurally wrong or unsound with the arena, and that b) that arena, in particular, has been the home to a bunch of historic hockey events. So it's an arena that can still be played in, and is worth (in the historical sense) still playing in.

I'm looking at the table again, and I think I see what you are getting at, because there are a bunch of Cups at the top of the table, and very few at the bottom. But I wasn't actually trying to show that more Cups have been won in older arenas. In fact, I initially only had the "team", "arena", and "date of opening" columns in the table, because I wanted to see for myself how new most of the arenas were. I did that for myself, in an excel table, and sorted it according to date of opening. When I decided to post an image of it, I added the fourth column, the "Stanley Cups Awarded" column, and only because I'd written about how few Cups have been awarded in all the existing arenas in a previous post. But since we are on that point, I think it's worth noting again that that column shows only eighteen Stanley Cups being awarded. The fact that sixty-one other Cup wins since 1926-27 are not listed is an interesting piece of information, at least to me. As far as I'm concerned, there are four, maybe five historically-worthy stadiums left in the league, with two coming down (Nassau and Mellon), and another one in the works (Rexall). That would leave us with only Joe Louis and MSG. I think that's a sad--and in Rexall's case, still preventable-- thing.


Any suggestions from Oil fans?


If I may digress from the theme du jour, anyone see Ryan Malone's quote in the Globe after Game 3?

"You saw that passion where (Crosby) scored his first goal, the intensity in his face. And the second one, you don't see him doing those [arm] pumps like that unless it's a big game on a big stage. That's when he brings his 'A' game. The true sign of a great player is someone who plays his best in big games."


and I know that my purchasing choices haven't been influenced toward Rexall or Canadian Airlines because of their endorsements.

Recently when I had a cold, I needed drugs and was faced with either a London Drugs in one direction or a Rexall somewhat further in the other direction. I went to the Rexall on the off-hope that one ten-thousandth of my purchase would pay for a tiny sliver of Shawn Horcoff's contract.

So I guess it did influence my purchasing habits, in a way.


I wrote a little post about the naming rights on all 30 arenas a while back. It's not the best post in the world, but it's related to this.
Here


Good to see you posting again! I was getting worried that your recent fame might have the Journal setting you up with a column of your own. I was imagining you and Staples on the same page. Yeesh!

I have to admit that I'm gaining a sneaking admiration for the romanticism you embody by steadfastly refusing to accept that hockey has become a business. Guess that's not so bad sometimes.


What makes me laugh is when a company goes out of business or has a few legal issues - or both - and then the name of the arena has to be changed. (Enron Field, for example.) :)

When the new stadium was built in Baltimore for the Ravens, it took more than a year to decide on naming rights - so everyone got used to calling it "Ravens Stadium." The initial sponsor was some internet company or something, so then the name was "PSINet Stadium," which elicted more venom than they thought because it was so odd and had strange capitalization.

Now it is "M & T Bank Stadium," after a bank in Buffalo, for gosh sakes.