He must be a South Pole Elf 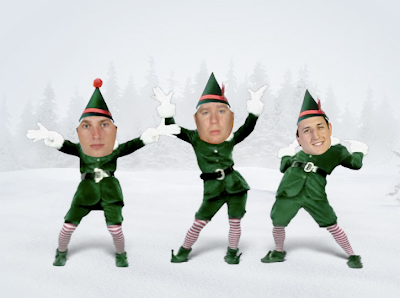 Glove tap to Boondock for this link (and idea). I laughed my jingle bells off. I've now gone and made my own. Unfortunately I couldn't add a voice, as the line was down for maintenance, but it would have said this:

Guess what? What? I'm going to the game Tuesday night! Yeah! So I won't be around to comment during the game. Boo. As for my prediction, well, you just yelled it. You sound so smart. Here's a little game we can play, though. A game?

Yes, I thought of it while crying tears of joy on the floor after the game Saturday night (more to come on that, btw, if Loxy ever gets off her sass). She smells like cheese. List your top-five favourite Oilers, right now. All-time? Current players only. But you said someone twice? He moves me so. Who are those guys? I only use nicknames, because I'm awesome. Oh. Awesome!

Now let's fight about who is right all day long. It will certainly be you, Andy Grabia!

Hey, you still here? Lucky you. You get to watch this video of Mr. Glass talking about his return to action. Note Jim Matheson grinning his face off at the beginning of the video. Cool, eh? So cool!

Still here? Alright...one more. Now watch the video of Schrödinger's Torres talking about his injury. Note the Gene Principe grimace at the start, Dave Mitchell from CFRN still hogging all the question time, and The Talented Mr. Samwise undressing in the background. Sexy, eh? Ew, why's he always wearing the same red ginch?


I vote this post "Most Likely to Have Been Influenced by Alcohol 2007".


1) Pitkanen (your nickname is way too hard to spell).

3) San Fernando (i was calling for nilsson to take the 4th shot but when i saw 34 flash on the screen, i knew the game was ours)

PS I'm heading to the tilt tonight as well. GOILERS!


Penner? Cmon. Really? Bold choice, though he has been playing much better.


Penner? Cmon. Really? Bold choice, though he has been playing much better.

i liked the move from day one. he clears up alot of space and even though his point totals are not awe inspiring...opposing players follow him around the offensive zone like he's a 40 goal scorer.


he clears up alot of space


I knew you were going to throw Dick as a Watch out there, Erin.

Did you watch the dancing?

I'll be bar hopping trying to find a place that is showing the game, and since I'm visiting my folks in Denver, I'm not holding out much hope. I'm sure there's some Div III college football that will be on instead. It's quite a shock to the "hockey system" when you cross the 49th... I feel like I have a greater appreciation for opiate withdrawl.


Just look at this garbage sports fans have to put up with here. Terry Frei is one of the biggest ignoramuses I've ever read or heard. Someone should forward him the definition for readability.

This was on the front page of the sports section. The thing that really irks me is their list of fastest current and former NHLers.
Theo Fleury is on the list but not Mike Gartner? OOOOOOK?
Maybe if both local newspapers weren't owned by the same company, the writers might be inclined to do some research, like say, an internet search. That's funny, I don't see Fleury's name anywhere on that list of Fastest Skater winners.

Anyways, sorry for the rant, this place's hockey ignorance is really getting to me as you can tell.

GOILERS!
Prediction:
Oil win 3-2 in the SO, Scorcoff gets the winner but I don't see it because I'm watching Southern Methodist Tech State trounce some other school I've never heard of and can't make up a funny name for.
God Bless America!


I shall also be attending tonight's game, which will result in a 3-1 win for our Oil!!


I don't see it because I'm watching Southern Methodist Tech State trounce some other school I've never heard of and can't make up a funny name for.

I guess Fort Lewis would be a good choice, but it's name just doesn't imply the same comedic mediocraty you get from a school like Miami University of Ohio


The true Smid cognoscenti still call him "Laco" (rhymes with "matzoh"), I think.

1. Your 2007 Masterton Trophy winner and Lord Mayor of Edmington For Life, Fernando Pisani
2. Raffi Torres, the Northwest Division's crazier answer to Ron Artest
3. Hemský
T4. Mini Magic Nilsson, for sticking it to the haterz, and Andrew Cogliano, for being an Oilers draftee who has ABSOLUTELY NO "concerns about his skating"


Scarlett, get on your mic if the boys start misbehaving. I'll be tuning in later on tonight. My spider senses tell me they are going to win it in reg. It's about freakin' time.


and, I realize it breaks the rules (in more ways than one), but in honor of tonight's opponent

I won't make a prediction about the result, but damn if it isn't about time that Dustin Penner's face scored a goal.

Pitkanen to Hemsky to Horcoff X 3.


Alright, I give up, I'm doin' it old school, via the new school. Give it to me straight, Rod!

Kipper, back in the West, is playing like a western conference goalie. Iginla scores, Tanguay scores, Huselius two assists.


Basically the same team as last year that couldn't get a crumb on the road. Go Figure.


"Probably his nicest of the season"

Good time to get hot Dusty, keep it up. Sounds like Tommy Boy made a great play at the blue line. Is it possible that we'll forget about 44 in two years? I'm really liking Gilberts play this year. I guess, who isn't?

Did we get Gilbert in the Salo deal? Mark that one in the win column for KLowe.

Gilbert was, indeed, the Salo bounty. Easily one of Lowe's best trades.

While it wasn't quite Nash at the Worlds, that was a hell of a power-forward move for the tying goal. Penner's starting to really come into his own, almost as if he's trying to spite me for that crack I made at CinO earlier today.

And finally, I like fighting, but do we really need to blow down the play for a bunch of huggy-bear shit on a five-bell rush? Sheesh.


almost as if he's trying to spite me for that crack I made at CinO earlier today.


If you're like me, you probably saw Luke Richardson in a Senators jersey and said, "wtf? He's still playing? Good for him!"


Talking about the pic of you praying to San Fernando.

Yeah, I saw the dance - funny shit. I did one of the kids and the dog and its been playing ever since. Kids can't get enough of it.

and, in honour of the guy we'd ALL like to pick as our 6th favourite Oiler (he's kinda like the 5th Beatle)…


Top five eh? This became more difficult fo rme this year but is slowly ironing itself out. Hmmm...

How come I always end up listening to the most exciting games, but somehow, I neeeeeever miss watching a game against the Wild.


You should try listening to a minny game. Rod makes 'em all game 7.


I don't see it because I'm watching Southern Methodist Tech State trounce some other school I've never heard of and can't make up a funny name for.

"Ya, I subscribe to NHL Network and Centre Ice Package, but you guys (Oilers) have so many PPV games, I don't get to see all of them, I can't afford it."

I know it's not true, but thanks Marty. I don't pay for Oilers PPV games (I get it with Centre Ice because I'm out of market, just like you Marty) but considering the quality of broadcast, it may be the biggest rip off on TV.


Just got home from work and I see we're once again heading to extra time. Unbelievable.


We have them right where we want them!


Got home from the game a while ago. Turco has this cool psych move where he turns sideways to the shooter and jumps square to them when they hit the blue line. It really looked like our guys were ever so slightly rattled in the process. Did they show Turco's move on TV tonight?

There's some talk of it over at MC's site, but I'm starting to believe the ridiculous amount of OT's we end up in may not be entirely random.