I make some bad hockey predictions on occasion, but it's not often that I'm embarrassed. This is one of those times. In the wake of the Steve Downie suspension, I allowed myself to believe Colin Campbell's indirect assertions [that's an oxymoron - ed.] that the league was changing the discipline process and cracking down on hits to the head. It was silly, because it's not like it was something I was desperate to cling to; it was more of a "Hey, OK, this should be interesting how it develops."

So I had to laugh -- and blush -- when I read Bob McKenzie's account of the GM conference call yesterday:

On the mega-suspensions of 20 and 25 games to Steve Downie and Jesse Boulerice, respectively: Burke had questioned whether the GMs ever signed off on or were advised of a dramatic change in standards for supplementary discipline, but was told each discipline situation is handled on a case by case basis and that the two big suspensions are not necessarily indicative of a sweeping across the board change to the approach on supplementary discipline.

Shorter version, with an extraneous word clipped out:

...the two big suspensions are not indicative of a sweeping across the board change to the approach on supplementary discipline.

For a guy who wrote mere months ago that we need to be more like House MD, I was rather dense. I have no problem with my fellow fans who wish things would change (and am occasionally inclined to agree with them), but they haven't. FYI.
---------- 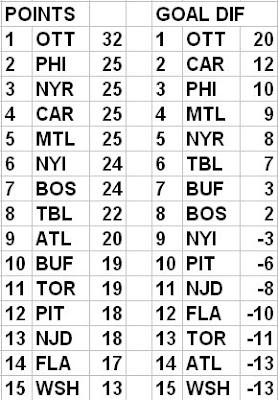 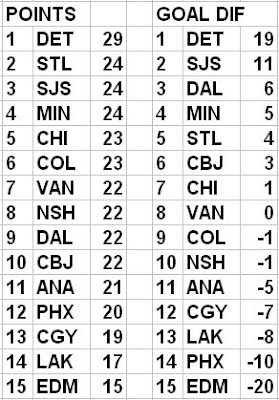 These are the standings, and goal differentials, for the two conferences after 20GP for each team.

I don't really have anything to say about them, but for the past two seasons I've been tracking and posting quarterly results, and I want to continue, as the information can be useful later on.

Since I've been a loud Tanguay defender over the past year, it's only proper for me to point out that he hasn't been that good lately, and needs to be better. Warrener is hurt (wow, I know, who's next -- Ethan Moreau?), so David Hale will be on the blueline... suffice it to say that I hope he's a lot better than he was the last two games he played in Detroit in April.

A Calgary W would be awfully sweet, and could very easily launch them into an excellent string of results from here until Christmas. Go Flames.


I'm surprised Burke even showed up for the conference call. I'd have thought he'd be too mad to share even a phone call with Kevin Lowe.


And why the hell should the GMs get to "sign off" on discipline? Shouldn't that be the owners' and the league's call? It's pretty obvious that a guy like Burke would have a keen interest in keeping the status quo as it relates to thuggery. Just take a look at his roster.


Was Kipper just yanked? Is he hurt? What happened? I'm happy with either of those scenarios.


I don't know if Kipper was hurt, but the goal he gave up was weak. He could have covered the five hole with his stick easily, but he held it out a bit and let the puck through.

The Flames are doing really well, despite the refs best efforts. The Conroy call (tripping) was really weak, and led to Detroit's third goal. But the call on Nystrom takes the cake. There was absolutely nothing to call there, but the ref stuck his arm up anyways.

I don't know if it's good or bad that both our goals have been long slapshots. If it turns out that that's the way to beat Osgood, then we need to build on it. But I don't like that we aren't getting scoring chances on many other shots.

This sure is getting frustrating.

Sarich/Regeher got the Zetterberg assignment. And they stunk. Kipper's still very mediocre.

I don't usually complain about the reffing but...sheesh. Wasn't why the Flames lost, but sure didn't help.

McElhinney's starting to really get some work now!


You know, I don't really hate the Flames (I hated them way less once they got rid of Sheehy), but Kipper losing a foot of his fastball is sure helping.

Isn't that a kick in the junk for a GM, though? You're looking at the resume, sign what you think is a fair deal, and then one day you look up and it's Red Light Racicot tending nets.


Something is coming to me... a distant memory from the past...

Something about the Flames and Kipper... there was carrying involved.

But seriously, for all the Flames strengths, they should be a far better team than this, even with Kipper being only average.


You're looking at the resume, sign what you think is a fair deal, and then one day you look up and it's Red Light Racicot tending nets.

I hope Kipper keeps it up.


Lain, sir, I believe you are tempting fate, here.

Let's just sit back and go about our business and if we pass the Flames in the standings AND we have everyone back, then we'll talk a little smack;)