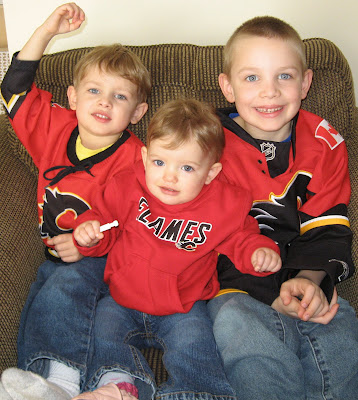 That's right, kids -- it's the first of eight games in this season's Battle of Alberta (8PM MT, HNIC). Just a few warmup notes:

**Just me, or is today's Robert Tychowski piece on the Schremp demotion more openly critical of MacTavish than anything in the Edmonton media since March 2006 or earlier? The ironic thing is that on this particular issue, he's right, or at least I think so ("I don't know that his game is at the point right now that he's going to be all that productive on an NHL power play." -- agreed). However, I'm with everyone else in being mystified at exactly what he's trying to accomplish with what Dennis called Mass. Transit.

**Yes, this whole Most Games to Start a Season With a Two-Goal Scorer is kind of silly, but I don't really care. Breaking any "record" that was set by the original Ottawa Senators is neat. Plus, it means the Flames are scoring, every game.

**Most predictable and boring story every year at this time = this one.

**Other previews: Lowetide's is excessively grim for a single game, to a comical extent. Clearly trying some kind of reverse karma dealy. Nice try. Metrognome's is the opposite, though I can't say any individual point he makes is over the top.

Myself... I'm trying hard to keep my expectations reasonable, but I still have this feeling that the Flames owe the Oil a 5-goal thumping (like the one they were supposed to deliver on the final Saturday of last season).

Prediction #1: unlike the first three home games of the season, the Flames will not find themselves down by two goals at any point in the game (btw they tied up all of them).

Prediction #2: some new Flame will have a big game. I'll guess Owen Nolan. (Hilarious Nolan crack from Rudy at the BoC, I thought: "He looks like the kind of guy who would drive on the shoulder of the freeway during a traffic jam.")

Prediction #3: the Flames win this game, in a suddenly-uncharacteristically low-scoring game. Call it a 3-0 Calgary win (Nolan x3, the 3rd on the Most Exciting Play In Hockey). Go Flames.


Oh Matt, have you seen the Oilers play this season? You are too kind.


Not much, I admit. Saw the end of the SJ opener, and the later parts of both Canucks games (where I figured, hey, most teams look like shit down 2 to Vancouver). One of the reasons I'm looking forward to tonight's game is to check out this monkey show for myself.


I am having too good of a day for the Oilers to lose - I see a win. The Sox are bootfucking the Tribe, the Merv came back from down 5-2 to win 6-5 despite having eight fucking skaters to the other team's 12...Oilers are gonna win.

But nice start for the Oil. Sheesh.


Hemsky misses the net on a breakaway!


Matt Greene pushes Huselius down, and then gets a shot through...kinda...and Gagner scores.


The Oilers' amateur scouting looks dynamite right now, and their pro scouting looks correspondingly bad. Penner + Grebeshkov = this, at least based on that fine period.


Also, Regehr needs to start playing better soon. This'll be a long 5.9 years if he doesn't.


Yep, there's the dark side of Joni Pitkanen. Was he even aware that Iginla was on the ice?


Same story so far for the Oilers - hanging in there, a couple of missed breakaways, 0 fer on the PP, big defensive gaffe and they're down.

A couple of fights. Nice.

Gotta say that this is not the Flames defence I remember. The Oil have at least had their chances.

Dustin Penner is a big sack of cement. Seemingly no instinct out there.


I see what people mean by light-weight in a heavy-weight's body now.

Zach looked almost as bad hanging onto Owen as Byron did on Sheldon haha.


That Stortini-Nolan fight was weird. Stortini frankly looked scared, but that can't be right.

Brodziak isn't quite blameless on that goal either. And hey, maybe they didn't know that play was coming! Jarome has only scored on it 8 or 10 times vs. the Oil since the lockout.

What's the deal, is that vicious Edmonton hockey media putting too much pressure on Penner?

Didn't you know? All Penner needs is a legitimate #1 playmaking centre.


On a related note, Stortini is headed back to Springfield tomorrow.


I realize that Craig Simpson can't blab on and on with inside info, whatever that might be, but what's with him not acknowledging that he was ever employed by the Oilers, even last season?

I'm not talking about the propriety of it (I don't care about that), I just don't understand why he appears to be pretending that he has no special insight about one of the two teams on the ice. Noticed the same thing against the Canucks last week.


I just don't understand why he appears to be pretending that he has no special insight about one of the two teams on the ice.


I realize that Craig Simpson can't blab on and on with inside info, whatever that might be, but what's with him not acknowledging that he was ever employed by the Oilers, even last season?

Okay, good. I thought I was the only one.

I'm watching with Cosh, Avi and Abboud, and we've decided that we need to give Gilbert the Francophone bump. The name is now pronounced as if he was born in Chicoutami, and we are trying out new first name. Jean-Thomas Gilbert is currently winning. Contributions welcome.


I can't tell if the Oilers are a better team thats snake-bit with rolling pucks, bouncing pucks, passes in skates etc, or if this is as good as its going to get with them. They had plenty of chances and even if they just hit the net on half of them, they could've stolen a point or two.

As to the Flames, forwards look good, but defensively they don't have much speed and consequently I think thats why Dion is getting so much ice. They don't necessarily need a defenseman that can rush the puck, just one thats quicker turning and getting to the puck on the defensive zone dump ins.


liked the picture of the kids,
Phil in london


Damn. I would have suggested Rene Gilbert, after the famous PQ leader. If ever there was a defense in need of a comb over it's this one.


Rene Gilbert was also in the running. I just don't think it can compete with Gilbert Gilbert.


Eliminating a first name and just calling him Gilbert was also a contender, but it's hard to make that work in print.


Those little dudes are pretty cool.

That's uh Cogliano and Gagner about two years ago right? But who's the third?