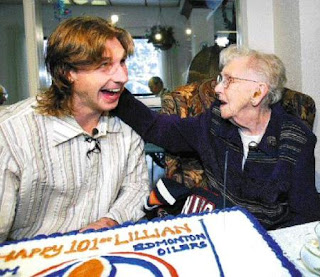 No offense to Grabia and the rest of you elderly women, (þ to Mirtle for digging up this classic photo), but now that Smytty has started talking smack about the Oil, you can all stuff your tissues back up the sleeves of your uncomfortably transparent blouses.

"Well, hopefully, I can be an Oiler killer."

That goofy-grinned, greasy haired, goalie interfering ding-dong is an Avalanche now. It's unnatural to have feelings any more amicable than general disdain for those contemptible jerks*


*Except when those contemptible jerks are playing for Team Canada -- at which point they become Captain Canada and Burnaby Joe. Hey, I don't make the rules.


Dude, you can't even spell the guy's name correctly. Oh, how quickly we forget.

"Oh no, I think I forget what he looks like? Was it his left ear or right ear that was lower?"


I just copied how they spelled it in the previous article. It's the American spelling, I guess. "Smytty" is Queen's English.


The Oilers correspondents on this blog are like a two-headed snake.

As an aside, Sacamano: shame on you for actually liking the new Oilers jersey.


Hey Man, I recanted -- not enough orange. Shame on you for not obsessively reading every comment thread on every blog in their entirety.

You're right, though. There has been too much internecine commentary around here. Let's get back to bustin' some good old fashioned Flames' chops.


I'm not sure I get it ... Smyth has always been a greasy mulleted goalie interfering ding dong, hasn't he?


Andy: What position does Smyth play?


You're right, though. There has been too much internecine commentary around here. Let's get back to bustin' some good old fashioned Flames' chops.

I was thinking that, too. More Mike Keenan jokes are necessary.

Andy: What position does Smyth play?

I'm confused. I know he has the pole position in my heart, LT.


What did you expect? He's getting over $6 Mil a year to be an Av now. Tell ya something, for that kind of cash I'd be dissin' my mom if it was in my job description.

Not to mention that there seemed to be alot of under the breath trash talk from Oilers management when he left. Not exactly a class act.

Gotta feel good for Smyth. Now he's car pooling to the rink, not to mention playing on the same line with Joe freaking Sakic. Who by the way made a personal plea by phone to Smyth to join the Avs. That's how to make a guy feel wanted!