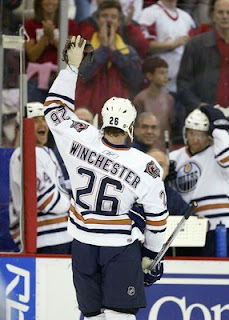 Petersen is a depth player, who will never again be relied upon by an NHL team like he was in the final 30 games of '06/07, but I have a shiny penny here that says there are more Shucks! in Edmonton this season about letting Winchester get away than Lupul.

Relive the peak of the Toby Matters era here.

J.F. Jacques still hasn't scored an NHL point, or even been in an on-ice goal hug -- marvel at the magnitude of that (and btw, can we get Elias on this?) here.


It gives me great joy to see your secret love become so public. The lady doth protest too much, methinks.


That is a great fucking picture. Most significant moment of his career, without a doubt.


Better than Staois laughing is the dude above him, who appears to be gasping. Or is that Deb Grey shouting? It's hard to tell.


Are you serious that JFJ has never been on the ice for a goal? If so then that is monumentally bad. For someone with zero plus points, his minus wasn't that bad. I guess just nothing at all happens when he's on the ice.