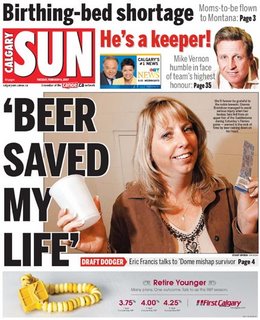 Just a phenomenal story on the cover of the Calgary Sun today. I'm not being sarcastic: interesting story, likeable subject, and awful-but-funny puns ("DRAFT DODGER" - yess!!) . Cover (shown at left) is here; story titled Woman hops from danger is here.

"Saved by beer -- who knew?" laughed Bradshaw, two days after a fan fell from the stands and into her lap from roughly 20 feet above.

"It's only because I pulled back to look up to see where this beer bath was coming from that he didn't land on either my back, shoulder or head. If not we'd be talking about something completely different."

The subject is no doubt too silly for a paper like the Herald to do a feature on, but hey -- I can get the world news anywhere. Best quote from the story:

"I'm a 46-year-old girl and it's not often young men fall in my lap," smiled the mother of two.

Best of luck to you, ma'am.


Those Flames fans are a class act. Not only was the guy so loaded that he went over the railing, he grabbed on to his buddy and dragged him over, too. Frankly, I'm choked I didn't get to this story first. It's a good couple years worth of material.


"Bradshaw is satisfied with a police investigation that determined the two men weren't drunk or causing trouble and no charges would be laid."

So, what, are you saying it's a cover-up? That's really more the EPS's style.


It's Calgary. How do I know that the cops weren't drunk too? Or high on chewing tobacco, at the very least?

Man
The number of times I've said that.


Is there anything it can't do?


The Cal Sun is the best newspaper in North America, but the Tor Sun's front page was pretty hot today too.

To wit: Lust in Space.