Remember Matt's heated defence of Jarmoe from last season? Remember how he pledged to talk about his value in July? No? Well, here's a reminder, from April 20, 2006:

Jarome Iginla had a good, not great, season, and now is the time when he will, or will not, earn his money. Am I saying that if the Flames go deep in the playoffs, he gets a pass on his non-Hart Trophy-contending regular season? Well YEAH!

Go forth, Jarome, and show everyone what you're made of. We can have this discussion in July.

Ahem. It is now September, and there has been zero discussion on Jerome Iginla, his salary, or his regular/playoff performance from last season. At least not on this blog. But recently, I think, Matt said everything he wanted to say about Jerome Iginla and his value. In fact, he shared his thoughts on the entire Calgary Flames roster, through his drafting in the "07 Hockey Blogger Invitational" fantasy draft.

The league is the brain-child of Mirtle, and has twenty teams in it. Almost every team is managed by a hockey blogger. A couple of weeks ago, we held our live draft. Let's take a look at how things went down. 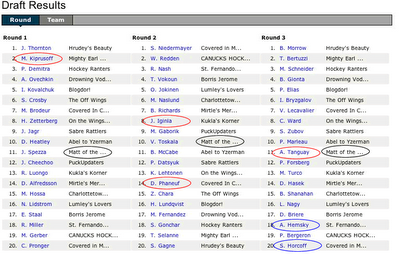 (click image to enlarge)
Note that Matt passed on Iginla in Round 1, and Phaneuf in Round 2, before choosing Tanguay in Round 3. I, on the other hand, took the first Oiler, Ales Hemsky, in Round 3. My plan was to take Horcoff coming back around in Round 4, but Mike at Covered In Oil beat me to it. Also note that Mike picked He-Who-Must-Not-Be-Named in the 1st Round, and Chris! from Covered in Oil took Phaneuf in Round 2. 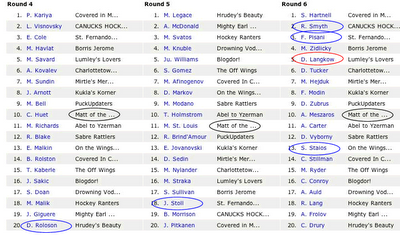 (click image to enlarge)
In hindsight, I should have taken Smytty in Round 4. I thought I could hold off. Little did I know how popular Oilers players would be to non-Oilers bloggers. Apparently the guys at COI are closet Flames fans, though, as Pleasure Motors followed Chris'! lead by taking Daymond Langkow in Round 6. Don't let his autodraft defence fool you, by the way. You have the ability to exclude players on Yahoo!, but he didn't. Makes a man wonder, is all. 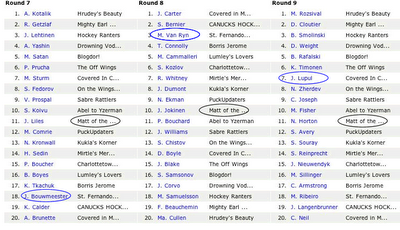 (click image to enlarge)
In these middle rounds, I went for Bouwmeester and Van Ryan, who should be Oilers right now. At this point, I've taken 3 Oilers, to Matt's 1 Flame. I've also lost out on Horc, Roli, Smytty and Staois, who I'm going to have to try and trade for now. 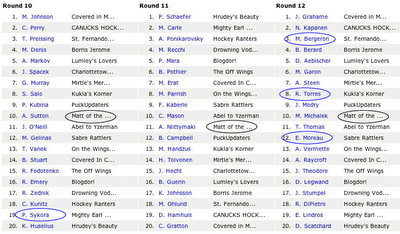 (click image to enlarge)
4 to 1. Oilers keep getting picked up by non-Oilers bloggers (I miss out on Sykora and Lupul), but the Flames have been abandoned by all. 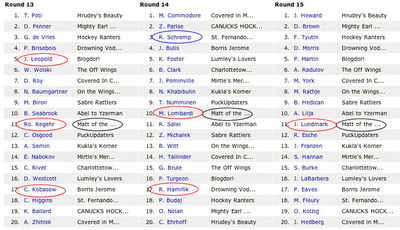 (click image to enlarge)
Matt now decides to takes some Flames, in the 13th, 14th and 15th Rounds. I boldy take the Hockey Jesus in the 14th Round, once again proving that I am a genius. 5-4 for me. 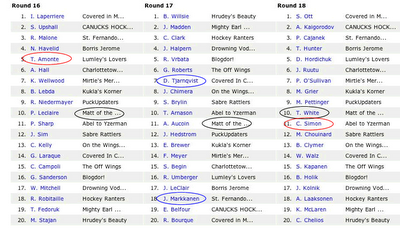 (click image to enlarge)
Pleasure Motors takes ANOTHER Flame, this time opting for Tony Amonte, who apparently is still alive. I had no idea. I take Jussi, making it 6-4. 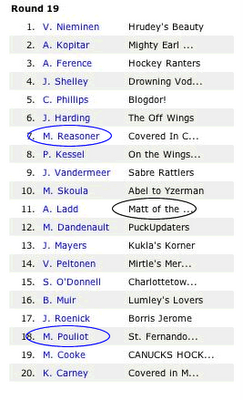 (click image to enlarge)
I take Pouliot in the last round, making it 7-4. I also picked up Traktor Boy after the game against the Jets this week, giving me 8 Oilers on my roster. Matt took one guy in Round 3, and then three more starting ten rounds later. I am eagerly looking to picking up more from the Oilers lovers throughout the fantasy league, because I believe in my team. As for Matt, who knows? I guess his drafting really does speak louder than his words.


On a side note, Sean Burke is still playing? The hell? I thought he was working for CBC now.


Four Flames picked before any Oilers are taken (and none until round 3!).

And what were you doing laying off Hemsky in the first round? Or passing on golden boy Dwayne Roloson?

You're right, this draft does tell us a lot.


I foolishly let the autodraft cover me for the last 7-8 rounds, as I had to run off to a wedding on draft day.

The result? Radim Vrbata, ladies and gentlemen, give him a hand. I wish I could package him with an Oiler to some of you people.

Also, Leopold isn't a flame anymore. Simon either, for that matter. Is Matt forgiven for not taking them?


I don't even want to talk about my autodrafted team. What a disgrace.

It's going to take more than a flash-in-the-pan Higgins to pry Petey Sykora from my Mighty Earl lineup.

I hear he's tearing it up with Hemsky.


And yes, folks, that was me throwing my pick into the sun on Cory "Out Until January" Stillman in the sixth round. In my defence, I was pretty hung over that day, and when I went to buy a hockey guide, all the 7-11 had was the Hockey News so I bought a New Yorker and a coffee instead.

As for the allegations of my closet Flames crush, let the record show that while I may have taken Phaneuf in Round 2, I did pick Lupul, Tjarnqvist and Reasoner (not to mention Georges Laraque) in the later rounds. So yes. My homer did succeed in crippling my team to some degree.

Phaneuf, though? That kid is a player.


Actually, if you want even further proof of Matt's faith, I offered him both Langkow and Amonte and he wouldn't even hear it.

"Daymond Langkow!" he said, spittng lukewarm Earl Grey all over his flatscreen. "Do I LOOK like I have a pudding cup with every meal?!" Then he sent me a list of 238 reasons why the Flames weren't going to make the playoffs.

The first part is true. So is the second.


http://sports.yahoo.com/nhl/news;_ylt=AhAJWmfrnu7Ys2qEQey6Mxx7vLYF?slug=cp-nhl_season_simulation&prov=cp&type=lgns
I have never laughed so much reading an article as I did this one. Just thought I would share. It would appear that not everyone thinks the flames will miss the playoffs...


As for the allegations of my closet Flames crush, let the record show that while I may have taken Phaneuf in Round 2, I did pick Lupul, Tjarnqvist and Reasoner (not to mention Georges Laraque) in the later rounds. So yes. My homer did succeed in crippling my team to some degree.

I can vouch for that. We would get angry whenever one of the other teams would take an Oiler. Like Earl, who loves the Oil. And Phaneuf IS an Edmonton boy.


Apropos of nothing other than the fact that some old and new Gateway people read this site--as well as other media types-- kudos for the cartoon editorial that ran yesterday.

We now return to our regularly scheduled ridiculing of the Calgary Flames.

And I was just warming up... Milan Hejduk in Round 6 and Glen Murray in Round 10. Evgeni Nabokov was right near the end.

This will be a cakewalk... (although I wish I'd drafted some Oilers).


Kudos to whoever picked up Phil Kessel in the 19th round. That will turn out to be a huge steal.

And Mirtle gets both Sedins, one in the seventh round? Well done!

Are you related? Because that's the only reason a spelling mistake would demand a "for cryin' out loud!"

Plus, your opinion is disqualified as a result of your liking the Sedins.


"Are you related? Because that's the only reason a spelling mistake would demand a "for cryin' out loud!"

He's from Smithers. Give him a break.


Yeah, James, I have to say you drafted incredibly well. I felt perpetually one step behind you all afternoon. Every time I thought "Okay, I've waited long enough, I'm taking him," you grabbed him first. Great work.

I'd feel worse about my overly cautious and occasionally mediocre drafting if I hadn't been the only CinO contributor who actually showed up to pick my own players.

And if nothing else, it was a great practice round for my work pool, in which I've got a formidable reputation as "that hockey guy" to defend. Also, it involves money.


To be fair, autodraft can take the blame for a lot of things. It's just impossible to remember to exclude every shitty player that you balk at when seeing how overranked they happen to be. (ie. its hard to remember that there are three Molinas to avoid like the plague)

You might have a lot to tear into him for, but pre-rankings just fail to take a lot of the situations into account (which is why it is permissable to skip work for an important fantasy draft).


Very true, which is why I jumped in to do mine. I forgot to exclude Pronger and all the Flames. I just about died laughing when i saw that Winters got Pronger.

I regret not just taking all Oilers. My original plan was all Oilers, with Sabres filling out the rest. But it didn't work out. I kept thinking I could wait, and then they were gone. I was actually surprised that so many Oilers went when they did.

Still nothing on Iginla and that $7 million contract from Matt, though. Maybe he wants to avoid the 200 comment pissing match that occured last time he talked about him.


Wasn't Matt's comment about Iginla referring to his playoff performance? If so, then he had 5 goals and 8 points in seven games. That's pretty good, espeacially on the Flames. I'm no huge Flames fan, but a couple of the games I watched them play against the Ducks, Iginla was the only one working his butt off and producing. Everyone else looked like they were asleep. Even Kipper looked normal. When it comes to the playoffs, Iginla is a powerhouse, and playoff performers are gold. Then again, it doesn't matter much if the rest of the team is sucking. snort


Not cool that you didn't let me in on this boys;) I'll have my revenge if you have a playoff pool...