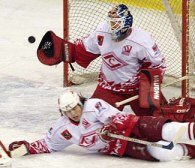 Readers of my personal site will have already heard the earth-shaking news that Japan's Kokudo Bunnies, former team of Randy Gregg and Bill Moores, have suddenly matured into slightly-more-intimidating Rabbits. But I neglected to report even more shocking news in hockey branding that some may have missed. Spartak Moscow--an occasional transatlantic visitor in Cold War days, a five-time Spengler Cup champion, and traditionally the top Soviet team that didn't have the advantage of being run by the KGB or the Red Army--has been disbanded and will not participate in Russian pro play for 2006-07. For busy readers, here's the d'oh paragraph:

The Russian Hockey Federation was ready to exclude Spartak from the Superleague, but gave the club a postponement until July 1 to make a final decision. The day before the deadline expired, Vadim Melkov, the then head of Spartak Moscow, said the club settled the issue with the RHF and would play in the Superleague next season. He said financial guarantees would be presented next week. On July 9 Melkov was killed in a traffic accident.

Hopefully it wasn't one of those Russian "traffic accidents" wherein a driver is killed by crashing at high speed into several dozen airborne particles of lead.


What coach will be fired first? Make sure to cast your vote:


WTF does your comment have to do with Colby's post? Good to see bs site spammers have found their way onto The Battle of Alberta as well...get a better site instead of trying to hijack good ones fauxrumors.


On the other hand, my post doesn't have too much to do with the Battle of Alberta as such, so maybe I'm the spammer.


It's hockey. It's good enough for me.

By the way, if you're looking for some great deals on vitamin supplements, try...